Brick was forged to the tunes of Swedish hardcore legends The Haunted and At The Gates, later on other raw models like Pantera, Killswitch Engage and Lamb of God brought their heavy machinery to further mold these fellows. All these hard hitting influences were mixed with singing techniques derived from earlier heavy metal acts such as Iron Maiden and Dio. A flirt with college rock up-tempo pop like Blink 182, Good Charlotte and Sum41 has also been included in the mix for good measure.
Brick’s music is determined to keep a steady beat and build a solid foundation for rhythmic drops and soaring refrains. The lyrics are sprung from everyday life and dealing with thoughts ranging from Middle East crisis to the perks of drug-dealing, to serving the end of mankind. All in the midst of daily routines where love, affection and general alcohol abuse is addressed humorously but sincerely.
‘Faceless Strangers’ was recorded in the midst of the dark Swedish Småland forests. The drums were laid at Dennis Studio (Shimmer Records) in Ljungby and the rest was recorded at Studio Milou in Värnamo. All engineered, mixed and mastered by Andreas at Ylitalo Productions, stirring the kettle to bring all the juiciest bubbles to the top. 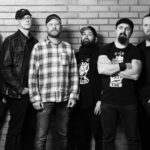