“Astonishment”. With this great feeling Dark Avenger present and lead the listener through the ‘Tales Of Avalon’, a play in two acts: ‘The Terror’ and ‘The Lament’. Dialogs of love and hatred, honor and despise, compassion and vindication, hopes and farewells, in a frantic unfolding journey through the emotions shared by Morgana, Arthur, Guinevere, Merlin, Mordred and all the ones who dwell in the Arthurian atmosphere of the album. ‘Tales of Avalon: The Lament’ was produced and recorded at Rossom Records by Tito Falaschi and R. Schumann using the ultimate technology in the musical industry.
The band and producers brought to life the atmosphere originally conceived for the songs, adding their combined talents to the musical work.
The mix and master process was in charge of the renowned Sound Engineer Michael Wagener, who created masterpieces such as ‘Master of Puppets’ (Metallica), ‘No More Tears’ (Ozzy Osbourne), ‘Slave To The Grind’ (Skid Row), ‘Balls to the Wall’ (Accept), among others. 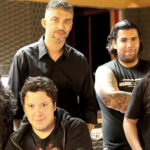