Darktribe formed in 2009 and recorded their first EP ‘Natural Defender’ that same year. The band quickly evolved into a powerful live act and in 2012 they released their debut album ‘Mysticeti Victoria’ on German label Massacre Records. More touring followed, and shows with the likes of Girlschool, Crucified Barbara, Killers, Lacrimas Profundere, Nightmare and many other international acts.
In 2015 Darktribe entered the studio to record their second album, ‘The Modern Age’, which was mixed and mastered at Hansen Studios in Denmark by Jacob Hansen (Volbeat, Epica, Doro, Primal Fear). The album displays a mature and confident band, still influenced by everything Melodic in Metal but with a very personal approach, multilayered songwriting and brilliant musicianship. ‘The Modern Age’ will be available starting from July 21st on Scarlet Records. 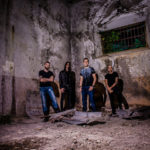 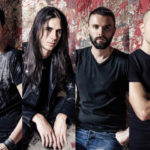