‘Rituals Of Black Magic’ is the fourth full-length release by Horror Rock sensation Deathless Legacy and the first concept album in their career. The album describes ancient black magic rituals in detail, with dosages, ingredients, processes and spells to cast. The occult grimoire consists of more than ten rituals, recovered from tomes hidden on the dusty shelves of the secret Vatican archives, snitched by the six monsters through the back door. Doing those rituals at home is not recommended and solely at your own risk!

Deathless Legacy introduce themselves as monsters on stage and off. As a grotesque shocking horror metal band, they wear their alter egos’ costumes and manners, spitting blood and biting the air with bestial fierce as the ultimate monsters worshipping the most powerful satanic forces. 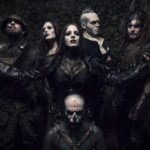