English Metal masters Def-Con-One, featuring former Venom and Mpire Of Evil drummer Antton Lant, have announced ‘II’ as the title of their forthcoming new album, following the band’s overwhelming debut ‘Warface’. With influences covering a wide range of musical styles, from modern metal to old school Rock and Punk, Def-Con-One have been described by the organizers of renowned Bloodstock Open Air festival as a bar fight between Machine Head, Slayer and Pantera. Frontman Davey Meikle pours heart and soul into the band’s heavy-yet-melodic groove laden delivery, one minute calm and laid back, the next exuding a mad staring intensity. The passion with which he roars on the most brutal songs of the lot contrasts neatly with the slower, more angsty numbers and takes many by surprise. The band has gone from strength to strength, played countless shows in their home country and beyond and is now ready to unleash themselves upon the world. 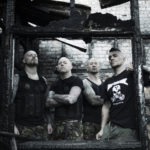