Six years after the critically acclaimed album ‘Dreamtherapy’, Czech leading power metal act Eagleheart is back with a new album and they are stronger than ever! After some minor line-up changes, the Brno-based band have come up with their most ambitious, dynamic, emotional and epic album to date, this time with three singers and, again, with the helping hand of Power Metal legend Roland Grapow (Masterplan, ex-Helloween). The new, long-waited album ‘Reverse’ will be released on August 18th, 2017 on Scarlet Records and its most definitely not to be missed by every fan of bands such as Symphony X, Kamelot and Blind Guardian!
This is how guitarist Michal Kůs commented: “While our previous record was about dreams and escape from the real world, this one is quite the opposite, it’s a wake up call for reality. This is one of the reasons for its title, which implicates moving into the opposite direction, a symbolic change. The whole production process took a bit longer than we expected but here we go again, offering our strongest, most dynamic and epic material to date. It’s the soundtrack of our lives in the last couple of years and we hope you will enjoy it as much as we do!” 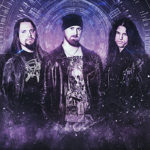