Progressive Metal veterans Eldritch are going to release their new album ‘Cracksleep’ on March 23, 2018 on Scarlet Records. This new album has been described by the band as the most diverse to date, mixing early-era Eldritch with some of their latest influences, technically challenging instrumental parts with dark atmospheres and arrangements, enriched by a lyrical concept that deals with some of the most common causes of insomnia. ‘Cracksleep’ has been recorded between October and December 2017 At Bigwave Studios in Livorno, Italy, the ES Studios in Rosignano Marittimo, Italy and mixed at Domination Studios in San Marino by Simone Mularoni. Artwork duties have been handled by Federico Mondelli (Be The Wolf/Frozen Crown). 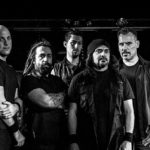