‘Winterbane’ is the new album from Frozen Crown, coming two years after the very successful sophomore effort ‘Crowned in Frost’ which gave the band huge media exposure – over 18 million views total on YouTube for their singles – and made it possible to be featured as special guest on the 2020 DragonForce European tour, amongst many other accomplishments. ‘Winterbane’ sees Frozen Crown amplifying the classic heavy and power metal components of their sound and toning down the symphonic influences even more, resulting in an aggressive and monolithic album thanks to the tasteful riffs and guitar leads of mastermind and songwriter Federico Mondelli and the astonishing female vocals provided by talented singer Giada “Jade” Etro. ‘Winterbane’ broadens Frozen Crown’s musical landscape while keeping intact an uncommon taste for haunting melodies and catchy refrains.

The band have recently introduced the new line-up. This is how they commented: “You heard them playing in our new album video sneak peek; now they finally have a face! It’s been so hard to find suitable members to replace the missing pieces of the Crown – especially during these hard, hard times. These guys put their heart and soul in the new album, providing with some technical and dynamic drums, some tight and aggressive bass lines and, of course, some flashy and awesome guitar solos. Hope you’ll love these three new fellas like you loved us, so far, as they really gave their absolute best, definitely making ‘Winterbane’ a close-knit team effort.

We’re very happy to introduce you to Fabiola “Sheena” Bellomo on lead guitar, Francesco Zof on bass and young prodigy Niso Tomasini on drums. ‘Winterbane’ will be out on April 23, but you’ll be very soon able to listen to some new tunes off it!” 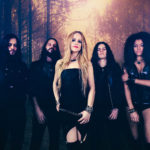 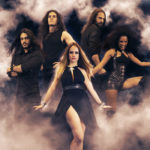