Furor Gallico is an Italian Folk Death Metal band formed in 2007 with the aim of blending Metal riffs and vocals with traditional Celtic, Irish and Breton tunes. After more than 300 live shows in Italy and abroad – some of which in support of many leading metal acts – they established themselves as one of the country’s most renowned bands in their genre, along with Folkstone and Elvenking, consolidating their ever-growing fan base and receiving large consent in many countries (France, Germany and Switzerland notably).

The outstanding cover artwork has been made by Kris Verwimp (Arch Enemy, Marduk, Arkona, Vital Remains). 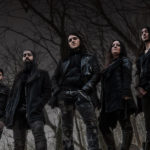