‘Shadow Of The Monster’ is the new album from Hell In The Club. The band features members of acclaimed acts such as Elvenking and Secret Sphere but their music stands out as something totally different: they mix classic hard rock and modern sounds, heavy metal and party songs, fifties rock’n’roll and anything in between. ‘Shadow Of The Monster’, the band’s latest effort, includes their strongest material to date, mixing and taking to the next level the freshness of ‘Let The Games Begin’ with the maturity of ‘Devil On My Shoulder’, with which the band saw rapid growth in popularity. ‘Shadow Of The Monster’ was recorded, mixed and mastered by Simone Mularoni (DGM) at Domination Studios in San Marino and will include a very special cover version of ‘Money Changes Everything’ by The Brains (brought to international acclaim by Cindy Lauper in 1984). Cover artwork was made by American writer, film-maker and prolific illustrator Nathan Thomas Milliner, a very well respected horror artist, who is consistently producing outstanding graphics for various comics, films, and horror conventions. 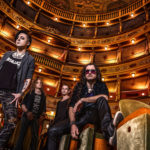 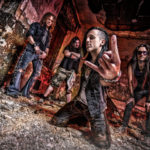