Like the riotous music they play, since their inception in 2011, Adelaide-based Thrash Metal three-piece Hidden Intent have been carving their way through the masses with their unabashedly unapologetic ‘80s-throwback thrash metal, a form of music that wholly embraces its American and European roots in the Bay Area, Scandinavian and Teutonic thrash scenes. Being lauded for their “energetic” live show and the “party thrash” they play for their audience, the Adelaide trio have continued to build their name well into the now.

With lead vocalist/bassist Chris McEwen (ex-Abyzmal, ex-Obsidian Aspect) at the helm, and the lead guitars of riff-lord and backing vocalist Phil Bennett (ex-Desert Eagle/TKBF), the trio is completed with the more recent addition of Paul Lewis (Hawkai, ex-Death Boundaries, ex-Tidal) on drums.

Entering into 2018, Hidden Intent ride off the back of such accomplishments as releasing their first full-length album, ‘Walking Through Hell’ in 2014, through Punishment 18 Records (Italy); supporting Danish Thrash Metal icons Artillery for their ‘Made in China’ tour in 2015; sharing the stage in their hometown with Helloween, Queensryche, Anvil, Venom Inc; achieving national support for Nuclear Assault Australian tour, playing large festivals in both Australia and abroad, Full Terror Assault in the US, headlining the Bangkok Thrash Festival in Thailand, and The New Dead Metal Festival, Blacken Open Air in Australia; as well as many more. This year has already seen the band release their highly anticipated new album, ‘Fear, Prey, Demise’ mixed and mastered by Andrew Kite at Against The Grain Studios! 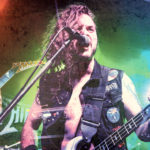 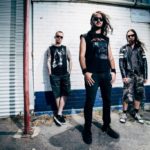