Mastercastle is an Italian Heavy Metal band with traditional and neo-classical influences founded by guitarist Pier Gonella (Necrodeath/ex-Labyrinth) and vocalist Giorgia Gueglio. The line-up is completed by bassist Steve Vawamas and drummer Alessio Spallarossa (Sadist). After having released 5 albums and toured incessantly in support of them, Mastercastle are ready to come back with their new effort ‘Wine Of Heaven’. Produced by Pier Gonella at MusicArt Studios, the band composed and recorded a bunch of songs directly in the studio with no pre-production, with the intention of keeping intact the spontaneity of the 9 chosen ones. They were able to come up with very innovative sounds by using low tuned instruments and progressive keyboards, as well as an intriguing lyrical concept centered around wine as our spirit and lifeblood. Strong riffs, virtuoso guitar solos and captivating female vocals are just some of the ingredients that make this album special. An album that is not to be missed! 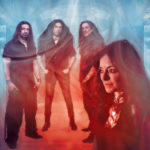