Noise Pollution is one of the most interesting and fast-growing acts in modern heavy metal. After the success of their debut self-titled release, supported by thousands of shows all over Europe and many notable festival appearances (Pistoia Blues among others), the band’s comeback album, ‘Unreal’, will be available starting from October 14th on Scarlet Records.
The band celebrated their 10th anniversary in 2015 with a long tour including appearances as direct support for Airbourne, Skid Row, Black Stone Cherry, Hardcore Superstar, Black Label Society, The Darkness and many others, dozens of sold out shows, constantly enlarging their fan-base.The tracks included in their brand new album are an interesting blend of groovy/catchy heavy metal suggesting a move towards Five Finger Death Punch’s and Black Stone Cherry’s latest works. 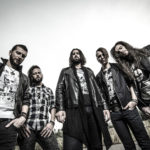