One Machine, the brainchild of acclaimed guitarist/songwriter Steve Smyth (Testament, Nevermore, Forbidden, Dragonlord, Vicious Rumors), have inked a deal with Scarlet Records for the release of their debut album, ‘The Distortion Of Lies And The Overdriven Truth’, to be released February 18th, 2014.
One Machine is an international metal band with classic and modern influences, featuring members carefully selected by Smyth: Mikkel Sandager (Mercenary) on vocals, Jamie Hunt (Biomechanical) sharing guitar duties, rounded out by a powerhouse rhythm section with Tomas “O’Beast” Koefoed (Mnemic) on bass guitar and Michele Sanna on drums (although former drummer Raphael Saini of Italian progressive metallers Chaoswave played on the album).
Smyth had often given thought to leading his own band throughout his distinguished career as a member of bands including Testament, Nevermore and Forbidden, amongst others. He had written a number of songs, but the challenge of finding the right members to bring them to life remained. He found a more than capable shredding second guitarist in Jamie Hunt, and the two began collaborating on the material Smyth had. “Jamie’s playing complements mine extremely well, and we hit it off perfectly when we got together to work on the songs” says Smyth. A vocalist was found in the form of original Mercenary singer Mikkel Sandager. He fit the kind of singer Smyth was looking for, with his versatile ability to sing in different ways, and his readiness to be pushed into new musical territories. “When our former bands toured together, I got to witness night after night, exactly what Mikkel could do; deliver a solid performance with an incredible range, as well as multiple characters in his voice. He’s perfect for this band!”
Smyth, Hunt, and Sandager then set about refining and shaping Smyth’s original material. In 2012, bassist Tomas “O’Beast” Koefoed, formerly of Mnemic, came on board, adding his distinctive sound to the tracks. “Tomas is without a doubt one of the most solid bassists I’ve encountered in some time! He literally added an entirely new dimension to these songs that would not have been possible to be achieved without him.”
‘The Distortion Of Lies And The Overdriven Truth’ was recorded and produced by Steve Smyth. Mixing was handled by Roy Z, mastered by Alan Douches from West West Side Music with artwork created by Niklas Sundin from Cabin Fever Media, complimented with photography from Anthony Dubois. 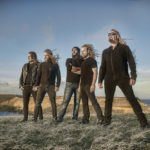