Known for their powerful melodic rock sound and fierce stage presence, Planethard have signed a deal with Scarlet Records and are now ready to unleash a new, exciting chapter in their career. Having acquired a unique vocal talent and frontman in the person of new singer Davide Merletto, Planethard have pushed their musical limits in multiple directions, still keeping faith to their roots. ‘Now’, this is the title of the band’s new album, displays a renovated sound made of heavy guitars, a solid rhythm section and addictive vocal lines, tightened together by the most powerful and modern production they have ever benefited from. These 11 new songs (12 in the Digipack version of the album) sound fresh and regenerating, having been inspired by their author’s souls and spirituality and handled with deep attention to every little detail. ‘Now’ was produced by Matteo Magni and co-produced by the band’s own guitarist Marco D’andrea. 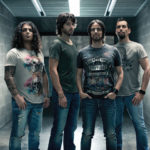