‘Spellbound’ is the new album of Progressive Death Metal veterans Sadist. Produced and mixed by Tommy Talamanca at Nadir Music Studios in Genova, Italy, ‘Spellbound’ is centered around the life and work of influential filmmaker Alfred Hitchcock. Each of the 11 songs included in the album traces the plot of a Hitchcock movie, including masterpieces such as ‘Frenzy’, ‘Notorius’, ‘The Birds’ and of course ‘Psycho’, all with a very distinctive Sadist twist that make them stand out. Musically, ‘Spellbound’ is one the band’s heaviest and darkest albums to date, but the Progressive and Death Metal influences that fans of the band have learned to love are still intact. The cover artwork has been made by SoloMacello (Ennio Morricone, Nick Oliveri, Mos Generator) and the first edition of the album will be available in a 6-panel digipack, vinyl limited to 500 copies and all digital formats. 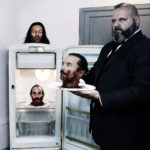