Secret Rule was formed at the beginning of 2014 with the intention to create a special sound with powerful rhythms and catchy melodies. The band is fronted by the powerful and crystal clear vocals of Angela Di Vincenzo (Kyla Moyl, and most recently a guest with Kaledon) and lead guitarist Andy Menario (Martiria), who has worked with big names such as Vinny Appice (Black Sabbath, Dio), Jeff Pilson (Dokken, Foreigner), and Carlos Cavazo (Quiet Riot). The line-up is completed by bassist Michele Raspanti (Graal) and drummer Ruben Ramirez (Myr).
In February 2015 the band released their first album ‘Transposed Emotions’, a mixture of facts and tales which analyse our society with a look into a post apocalyptic era. The album was recorded in 2014, produced, mixed and mastered at the Antfam Studios in Denmark by Tue Madsen (Halford The Haunted, Mnemic, Hatesphere, Ektomorf), while the artwork was created by Simona Speedy Saccoccia.After some gigs in Italy the band was on tour in Switzerland, France, Germany, Belgium, Holland and UK, taking part in some festivals such as the SOS Fest in the UK and the WIZZ FEST in Belgium, where the band was highly appreciated.
In September 2015 Ruben leaves the band for personal reasons.
In October 2015 the band starts recording their second album “MACHINATION”. The line-up for the new album also includes Sander Zoer (ex Delain, Leah) on drums, Henrik Klingenberg (Sonata Arctica) on keyboards and other special guests such as Stefan Helleblad (Within Temptation), Timo Somers (Delain), Fabio D’Amore (Serenity) and Janneke De Rooy (Paper Doll Decay). The album is produced, mixed and mastered by Tue Madsen (Antfarm Studio) and the artwork has always been created by Simona Speedy Saccoccia.

The CD will be released on 24 June 2016 by Scarlet Records and the band is currently organizing the shows to support the album release. 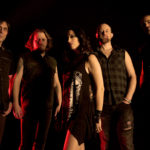 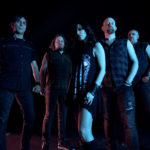 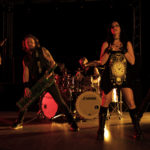 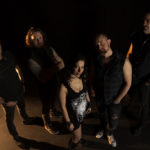