Long-time friends Kristoffer Göbel and Christoffer Borg decided to put the band together while mixing the first album ‘The Six Foot Six Project’, in 2018. Göbel recorded it as a solo effort, but a real, tight and hungry band emerged in the process. Two years later, Six Foot Six are going to leave a mark in the international heavy metal scene with their new and exciting record. ‘End of All’ is a powerful collection of songs that showcases all the various faces of Six Foot Six: the melodic side, the epic side, even the dark side. Leaded by Göbel’s amazing, pristine and charismatic voice, the Swedish quartet will take you to a breathtaking metal journey based on the pillars of this genre, but with a modern sound and a very contemporary feeling. It’s the end of all, indeed, and the real beginning of something unique and captivating… 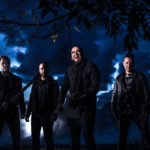