Imagine yourself being naked, locked-up in a bleak and cheerless chamber, having only one chance to accomplish your mission. Solar Fragment experienced a similar situation when they came to the Alphasound Studios with no electric guitars, no amps, no drum set. Luckily, they could leave their clothes on.
The weapons of choice on that day: acoustic guitars and a wicked wooden crate for drumming. The challenge: to record three of the band’s favorite tracks in unplugged or rather naked versions – each in only one full take.
The result: It is ‘From Our Hands’ – as handmade as it could possibly be. Yet another unique contribution by the fiver from Dortmund, Germany, to the Power Metal spectrum – while in the last couple of years Solar Fragment had mainly contributed to the survival of the Power Metal fan base by reproducing eagerly.
The natural sound of this slim unplugged production adds all new elements to songs you have already had spinning in your head years before, especially making room for Robert Leger’s extraordinary voice and the quality of the musical compositions.
All three tracks in this release stem from Solar Fragment’s second album entitled ‘In Our Hands’. Starting with the title track ‘In Our Hands’ it becomes obvious that metal and decent behavior might be incompatible at some point. Then comes the music. Whereas the album version is furiously heavy from beginning to end, the reduction of instrumentation leads to an increased focus on the core of the song, that is rhythm and ear-catching, melodic vocal lines.
For the second piece, ‘Come Hell Or High Water’, the presence of acoustic guitars is nothing new. But taking out all distortion and high-velocity drumming, this song becomes the folky pirate shanty it was always meant to be. “Race the Seas”, being a semi-ballad on the album, unfolds its full atmospheric depth in this new recording.
A brief flash-back in the history of Solar Fragment: After getting together in the mid of 2004 the band quickly became a substantial part of the German Power Metal underground. Both, the demo recordings and the first release ‘A Spark Of Deity’ (2008) immediately gathered them remarkable international feedback and praise.
After splitting up with their label Sleaszy Rider Records, Solar Fragment went on composing new songs. Almost 10 months of writing and demoing later the band got back to the renowned Kohlekeller Studios to complete a new and exciting chapter in their history, entitled ‘In Our Hands’ (2011). With this groundbreaking album the Band became a member of the Scarlet Records family.
So while waiting for Solar Fragment’s next full length album, make yourself comfortable and let this authentic recording, ‘From Our Hands’, take you to a crackling fireplace in the deep of the night. 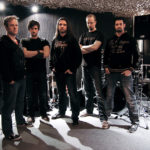