Death metal machine Ulvedharr are back with their much anticipated new album ‘World of Chaos’. The band described it as their most mature and groovy work so far, perfectly balanced between the primordial old school death metal influences and the modern thrash/death solutions with dissonant black metal interferences that they’ve displayed in recent years.

For the first time in their career the four piece leaves behind the medieval/mythological lyric concept to embrace a modern vision of human existence, controlled by the rules of chaos. This new approach will throw you in a spiral of fear, paranoia & self-destruction.

‘World of Chaos’ has been recorded between February and March 2019 at Underground Studios Sweden in Västerås by Pelle Saether. The amazing artwork was made by the master Paolo Girardi. 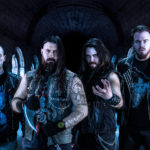 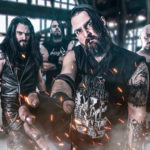