Think of a huge orchestra and a massive symphonic choir intertwined with powerful riffs and enchanting melodies from a clear and passionate feminine voice, and you’ll get an idea of what WHYZDOM have managed to create. Their classical influences ranging from the romantic to the contemporary period, as well as the appealing melodies that drive the songs, make their sound utterly unmistakable in an ever growing scene.

The project was founded by the guitarist and orchestrator Vynce Leff in early 2007, already well known in the progressive sphere having produced several successful albums for the British label Cyclops Records. After recruiting the band members, a first EP “Daughter Of The Night” was recorded less than 6 months from the band’s inception. It got instant acclaim from reviewers and music fans around the world, as well as several awards and plaudits (Best French Band 2008 – Metalsymphonique.com, Best EP – HeavyLaw.com, etc).

Although still a young band, WHYZDOM were invited to play in several festivals in France – most of the time as headliner – and won the Metal Female Voices Fest Contest in Belgium in October 2008. They played in the 7th edition of this great Festival (17/10/2009) and also played as official support to DELAIN to launch their début album.

In June 2010, WHYZDOM lead vocalist Telya Melane left the band. Lisa Middelhauve, former XANDRIA singer, accepted to be “guest lead vocalist” for the band performance at the RAISMES FEST 2010 and for their concert in PARIS as support for TARJA.

Since then the band composed and recorded their new album “BLIND?” (with temporary vocalist Elvyne Lorient), which was released on 30th October 2012 by the great European Metal label SCARLET RECORDS. Marie Rouyer (Marie Mac Leod since her marriage in 2015) became their new front woman in January 2013.

After a great series of gig throughout Europe, playing in great fests (DAMES OF DARKNESS in the UK with DELAIN, NIGHT OF THE BEAUTIES in Germany, MENNECY METAL FEST in France with CRUCIFIED BARBARA), they record their third album “Symphony For A Hopeless God” which was released in February 2015, again acclaimed by reviewers around the world. Success is such that they are invited to play even bigger fests, like MADE OF METAL FEST in Czech Republic with EPICA, BELPHEGOR, AMORPHIS, FemME METAL EVENT in the Netherlands with LACUNA COIL, THERION, DAMES OF DARKNESS, with SIRENIA.

After their great peformance at the FemME METAL EVENT, they decide to release their first DVD “Alive” in 2016, including their whole set at the fest plus several other live extracts from other concerts.

They enter the studio in 2017 again to record their 4th album, also released by Scarlet Records on 6th April 2018 : “AS TIME TURNS TO DUST”. They tour successfully in Europe, with again a great highlight show at the METAL FEMALE VOICES FEST with full choir. The Covid crisis stops their live activity, but not their creativity: they come back again, more powerful and symphonic than ever, with a new album “Of Wonders And Wars” in September 2021, starting with the great video “Notre Dame”, based on the terrible fire that destroyed the spire and the roof of the Cathedral. 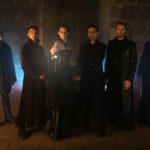