Symphonic power metal band Winterage have signed a deal with Scarlet Records for the release of their new album ‘The Inheritance Of Beauty’. Having previously released the critically acclaimed debut album ‘The Harmonic Passage’ (2015) and shared the stage with renowned bands such as Angra, Moonspell, Elvenking, Dark Moor and many others, Winterage are now ready to unleash their full potential and reach a broader audience with their new, ambitious effort, a powerful Symphonic metal album with strong influences coming from Irish folk, classical and medieval music. Alongside the typical rock instruments the band is known for the presence of a violin in the line-up and the use of a full orchestra and a choir during the recording process. Over 50 musicians and other professionals took part in the production of ‘The Inheritance Of Beauty’, including Tommy Talamanca (Sadist), Roberto Tiranti (Labyrinth) and Vito Lo Re (Rhapsody Of Fire). Simone Coen (Chocolate Studio, Apple) mixed the album and Jacob Hansen (Amaranthe, Epica, Fleshgod Apocalypse) took care of the mastering duties. The beautiful and evocative artwork was made by Peter Sàllai (Sabaton, Hammerfall, Amon Amarth). The band also announced the arrival of the new guitarist Gianmarco Bambini, after Riccardo and Dario Gisotti’s decision to leave. The record sees their participation as musicians and composers: the band is keen to greet them publicly, thanking them for all the music and friendship they have shared over the years, and wishes them the best for their professional career. 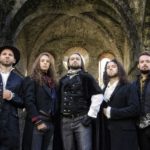