‘They Never Say Die’ is the new album from SkeleToon, a Power Metal tribute to Eighties classic flick ‘The Goonies’ by Richard Donner/Steven Spielberg. With eleven guests taking over the main roles, ‘They Never Say Die’ is the third of five chapters in the band’s “Nerd Saga”, a fictional journey that goes way beyond a natural love for the “geek” world of cult movies, videogames and comics, to describe the world seen through the eyes of those forcibly removed from the masses because of their passions. ‘They Never Say Die’ has been recorded, mixed and mastered at Domination Studios by Simone Mularoni (DGM) and includes many special guests including Michele Luppi (Whitesnake), Giacomo Voli (Rhapsody Of Fire), Morby (Domine) and Alessandro Conti (Trick Or Treat). The beautiful artwork has been made by Stan W. Decker (Primal Fear, Stryper, Ross The Boss, Jorn, Masterplan).

SkeleToon released their first album ‘The Curse Of The Avenger’ in 2016, while the second chapter ‘Ticking Clock’ was released the following year and featured notable guest appearances by Roland Grapow, Dennis Ward (Unisonic), Jonne Jarvela and Piet Sielck (Iron Savior) among others. ‘They Never Say Die’ will see the light of the day in February 2019. 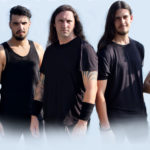